I had a nice visit in Knoxville. I was able to get rid of a lot of pack weight, socialize, with friends, bathe (a lot!), do laundry, and rest up. The last evening in Knoxville, Suttree’s High Gravity Tavern had their official grand opening party. There was beer, food, and Mrs. Tennessee! Who would have thought! She was having a pretty good time. I was so fortunate to have gotten a photo made with her!

And then this guy, he was really lucky!

We had a pretty fun evening… oh and Mrs. Tennessee was the life of the party!

The hard part is over! (For now…) The ride from Knoxville was pretty physically challenging. It took me three days to make the 193 mile trip.

The first day out of Knoxville, my friend Shane rode with me to Caryville, TN. That was a 50 mile day. We got a late start, the heat was intense, and the hills were, literally, a pain in the ass. We took the same rout north of town that a group of our friends took last fall to Norris State Park. Here’s the route if anyone is interested!

Head down Central St. and climb up that hill (past Three Rivers Market). The road turns into Bruhin. At the bottom of the hill you will reach a stop light, go straight. Climb another hill. This road turns into Inskip. Take a left onto Highland (or any of those neighborhood roads to the left) continue until you hit Rowan Rd. Turn right onto Cedar Lane then turn left onto Haynes Sterchi Rd. Right on Dry Gap Rd. Take Dry Gap all the way to Emory Rd. Right on Emory Rd. Second Left onto Pedigo Rd. Left onto Childress Rd. Deadend to Brushy Valley Rd. Take a left and then your next left back onto Pedigo Rd. Pedigo Rd. deadends to Norris Freeway, take a left. Ride for about half a mile and turn right onto Raccoon Valley Rd. Left onto Twinville, Cross Andersonville Pike. The road turns into Old Jacksboro Pike. Take a Left onto McGill Branch, Right onto Hinds Creek. Left onto Carden Gap, slight right at bottom of the hill onto Indian Gap Rd. (go up a hill) Climb Indian Gap, go down Indian Gap. Turn Right onto Mountain Rd, Immidate left onto Defoe St. Turn Left onto TN-61/Andersonville Hwy. Right onto Norris Freeway… take that all the way into Norris State Park.

It’s a fun ride, but has a lot of short and steep hills. The climb into Norris is long, but you are rewarded with a downhill 🙂 We took an hour break at Norris and swam in the 40 degree water! It was so refreshing! After leaving Norris we headed to Lake City and then continued on toward Carryville.

The next day, I left Carryville and headed down Old TN 63. At this point I began the solo part of my journey. I was pretty nervous about that particular stretch of road because there is no cell phone reception and not too many people (in or out of cars). It turned out to be a really nice road though! The only issue was that there were dump truck stations at either end of the 8 mile stretch of road, so I had about 7 dump trucks pass me in less than an hour. They were fairly courteous, but they are still dump trucks. The road followed a creek and and railroad track, which provided a lot of shade and cool patches. It was comprised of small, fast rolling hills at first, and then toward the end it turned into a gradual climb. Old TN-63 eventually met up with the New TN-63/Howard Baker Hwy. From there I rode to Onida, TN. Stopped and had a grilled cheese and milk shake at the local Sonic and continued on up US-27. These larger highways are full of traffic, but I had a GIANT shoulder all the way to Somerset, KY. The little towns in between Onida and Somerset are awful. Don’t ever go there. The people are not friendly and are kind of hateful towards cyclists. The motorists were fairly tame – I had a couple of people shout unintelligible words out the window – but interacting with them off the bicycle was uncomfortable. I guess my bicycle was threatening their family values. Whatever.

The Tennessee/Kentucky border kind of blended together; I couldn’t differentiate between Scott County TN or McCreary County KY. I was a good 5 miles beyond the border when I came across this water tower for Strunk, KY. Strunk kind of stunk.

At least I have this photo to remind me of the border crossing between TN and KY! I was pretty glad to get to Somerset. I ended up getting a hotel after riding 83 miles. I could have ninja camped in the Daniel Boone National Forest, but I was too tired and too hungry to deal with that. I think once I get to the Trans-America Trail I’ll be able to find more affordable camping solutions. It’s just kind of tough when you’re trying to make up your own route through some rough counties in the Cumberland Mountains.

Then yesterday happened! Ooooh it was my FAVORITE day of riding so far!!!!! It was cool all day long, I had a tail wind for the first part, the terrain was flat/rolling hills for a majority of the ride, the scenery was beautiful, and the traffic was minimal. If you are ever in this part of the world, the cycling between the Cumberland Parkway and Campbellsville is awesome! Here’s the route:

KY-80 W/Bobtown Rd to KY-910, take a right at KY 910. Go about a mile and turn left onto State Hwy 1640/Thomas Ridge Rd. Ride along that road for a little while until you dead end at US-127. Take a left at 127 toward Dunnville. Cross the river and take your second right onto Sate Hwy 2310/River Rd. This is a pleasant ride through a bunch of Amish farms. There was hardly any traffic – I think one truck passed me from the opposite direction? There are a couple of small steep climbs, I did use my granny gear on one of them, but for the most part it was a fun stretch of road. Toward the end of that road you will see Eunice-Dunnville Rd to your right. Go right. It cuts out a little bit of unnecessary riding up a hill. Eunice-Dunnville will put you onto Liberty Rd/State Hwy 207/State Hwy 76.

Take a right and go across the creek. Take your second left (the first is a dirt road) onto Elkhorn Rd/State Hwy 76. Follow this road all the way to Knifley (pronounced Nif-ley, not Knife-ly). Go through the stop sign in Knifley at the bottom of the big hill. Go up another hill, at the top of that hill, turn right onto Eastridge Cemetery Rd. The fellows at the gas station in Knifley said that you bypass a bunch of other hill if you follow the ridges to the East. So I did that. It was only a mile or so longer! Go down Eastridge Cemetery Rd. and then take a left onto Speck Ridge. Speck ridge will dead end into State Hwy 76, and 76 will dead end into US-70. Go left to ride into Campbellsville or go right to keep riding.

My favorite part of yesterdays ride were the flowers on the side of the road. There were fields of Queen Anne’s Lace! I think they are such lovely flowers. The section of road after River Road (the Amish farm section) there were so many Queen Anne’s Lace flowers lining either side of the road that from the top of the hill it looked like white carpet. I heard a lot of different bird calls in the same area. 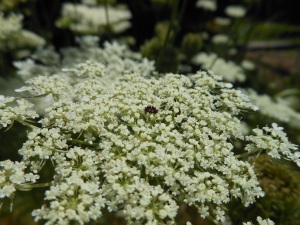 I finally got to Granny’s house around 3pm. I traveled 61 easy miles. She gave me snacks and drinks. We tried to sit in the shade out side, but at that point it was getting too hot, so we retreated into the air conditioned house. We lazed around for a while and later in the evening she fixed us one of my favorite dinners. Pinto Beans & Cornbread. With steamed squash from Carolyn’s garden, a salad, and pork chop. Mmmmm. Just what I wanted. I’m so glad that I have a few more days to visit and eat with the family! I really don’t mind because there’s a ferocious heat wave passing through the Ohio River Valley and temperatures are rising into the low 100’s!

Well, I’ve spent too much time sitting at the computer. I uploaded all of the photos from the beach vacation, the trip across NC with Shelagh, and from the past few days to to Flickr site. Enjoy! I’m going to go visit and eat more food!

One thought on “Knoxville to Campbellsville in three days”

This site uses Akismet to reduce spam. Learn how your comment data is processed.