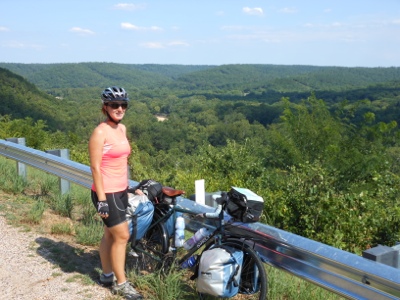 I made it to Kansas! And it only took me four days to ride through Missouri! I rode from Chester IL (the Popeyes town) and crossed the mississippi river into Missouri on Sunday morning. I arrived in Farmington at the really cool bike hostel called Al’s Place, I think I mentioned it in my last post…? It is an old jail house that the town of Farmington renovated and converted into a cyclist hostel. It’s named after Al Dziewa – he was an avid racer and an influential person within their community. It is really quite nice what they have done with the building.

Tyler and I met another cyclist in the hostel, his name is Michael and he rode with us the following day through the first section of the Ozarks. That day we traveled 75 miles to the quaint town of Ellington. (We averaged 14.5 mph, I thought that was quite impressive considering the hills and the weight of the gear!) In the town center we came across another touring cyclist – she was traveling solo, too! This made me very happy and it was extremely encouraging. Kim was the first solo female that I’ve met and only the second lady total on the trans-am. She is traveling eastbound and ended up getting a hotel. I really wish that we could have hung out that evening, but we already had a warm showers host arranged. We arrive at our hosts, Betsy and Wayne’s, house, but only after passing some cows “doing it” (trying to keep it clean for the mother and the grannies!) in e adjacent field and pushing out bikes up their steep, gravel driveway. I love staying with hosts, usually if you give them enough notice they will gladly cook you dinner! Betsy prepared us a fresh salad with tomatoes from her garden (the freshest produce I have consumed all tour), pasta with ad meaty tomato sauce, and garlic a bread. We got to take showers and they offered their air conditioned camper for us to sleep in for the night.

Tuesday, Michael and I were up a bit before Tyler and ended up getting a head start. However, Tyler beat us to the next town by almost 4 hours! This was due to a few reasons:1) Tyler is a string cyclist 2) the hills were longer and steeper (definitely didnt average 14mph!) 3) we swam in rivers! There were two really nice rivers that crossed. The first one was only 15 miles down the road and we waded around for 10 minutes and chatted with the boy scouts in canoes. Several hills later and in the heat of the day we found another river through state park access. There were a few families hanging out and some old ladies drinking beer and sitting in their beach chairs in the shallow water. They certainly had the right idea! Michael and I had a dinner break in Summersville at a restaurant called Spring Valley Cafe and they made the best onion rings I have ever eaten. Holy shit, they were awesome! Yes, better than the onion rings at Pizza Palace – slightly different style, but significantly better. We finally rolled up to the city park in Houston just in time to take showers at the city pool. An older man was talking to Tyler when I got back to the pavilion and he was kind of like the guardian of the cyclists for Houston. Almost every night he stops by the park to see if anyone is passing though town. He drove the three of us down to road to grab second dinner at the local sonic.

The next morning Tyler was up and gone way before I was even aware of the fact that my alarms were yelling at me. So, Michael and I rode together again. It wasn’t until we were pretty far down the road that I realized that I’ll probably never see Tyler for the rest of the tour. 😦 my little buddy is gone! He hauled ass that day, rode well over 100 miles, but such is life on tour. You gain riding companions and you loose ’em. We are going to keep in touch just in case we have the chance to ride together later on down the road, like in Montana, for example. Michael and I stayed in Marshfield. We pulled another 70ish mile day – that’s three 70 mile days in a row through the Ozarks. At this point i’m starting to feel tired. I haven’t had a “no ride” rest day since Campbellsville. (I rested by only traveling 25 miles about a week ago, but over all it wasn’t too beneficial. That was the crazy evening with the Slovak and Brit.)

We slept in another city park that night. The ACA maps tell us to either check in with city hall, the police, or the sheriff if we want to camp in the parks. So far, of the two city parks that I’ve stayed in police have checked in. They don’t speak with us or anything, but they kind of just scope things out. It makes me feel comfortable that they incorporate us into their nightly routine. This park was pretty nice, we were just a block away from the fair ground where they left the showers open for us to use. I made a big batch of a pasta primavera type dish. It was tasty! I’m going to eat the left overs tonight – two days later.

Then yesterday happened. It was kind of crazy. This is the kind of day that I don’t tell my mom about until after the fact. Otherwise she will text me non stop. 😉 I woke up in the morning and was feeling incredibly tired. I guess the only way to explain it is that I woke up feeling like I had already bonked. It sucked. I took forever to get my camp packed up, and just as I was getting everything back on the bike this hound dog shows up. He looked like he could have been a pure breed (all in tact), but had been lost and hungry for a while. We noticed that he was coveredin blood, it was hard to tell if it was the blood of an animal that it killed or his own blood. We figured that it was his own blood and it was coming from the neck. Poor fella must have gotten into a fight.

Anyway, he was slinging dog blood all over the place and I was trying to keep him from getting it all over my stuff. Michael handled the injured dog – I don’t deal with strange injured dogs. You avant trust them when they are in such a vulnerable state. Michael eventually tracked down animal control via another city official and we left the park. But before we were even a mile down the road my bike computer quit working. So I spent a good 20 minutes fiddling with that. I could tell it was going to be just one of those days; I wouldn’t have been at all surprised if we had to deal with a mechanical or a flat.

Fortunately, the first 20 miles were pretty easy. It was mostly a downhill gradient and not too much traffic. Then we hit our last batch of hills. They weren’t like the heart of the Ozarks, more like the tall rollers in Iowa, nevertheless they were annoying and I was tired. At mile 50 or so we stopped in at a town called Everton. We stopped to eat at a Mexican restaurant called Mama Locas Cafe. They had awesome margaritas! They weren’t too sweet and packed a punch. It definitely made the next hour of riding through the last of the hills much easier. And when I say a margarita makes the riding easier that doesn’t mean that I go faster! It means I can’t feel my legs and the riding is just easier. 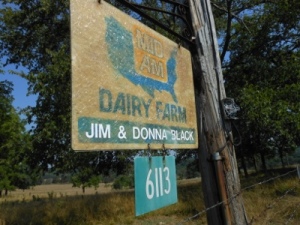 Around 7:30 pm we roll into Golden City and catch Cooky’s restaurant right before they close. I ordered strawberry-rhubarb pie, my favorite! It was just enough sugar to give me the crazy idea to keep riding. At this point we are somewhere around mile 80. We planned on stopping in Golden City for the evening, but we were both energized and crazy enough (or perhaps delusional and tired) to make the decision to ride another 30 miles to the next big town. So we start riding at dusk. The temperature dropped and we chased the sunset, which was lovely, by the way. As it got darker the fireflies came out and were like strobe lights on either side of the road.

We were hauling ass. We were officially out of the Ozarks and the foothills and on the flat terrain that will define Kansas. The last time that I looked at our speed on the computer before it got too dark we were holding a steady 18 miles per hour. It was so dark out and only a car or two would pass sporadically. We eventually see our sigh for 14 miles left until town. Yes! Only 14 miles, then POW! Ssssssss! Oh hey, a flat! Michael’s read tire blew out, fortunately underneath the only street lamp for miles. We stop, curse a lot, and find the abrasion on the tire and start looking for flat repair stuff. But before we get too involved in the process I suggested that we try to wave a car down. It’s about 10:15 in the evening and there is a set of headlights in the distant. A minivan zooms by. We wave our arms. Nothing. Michaels asks if i think someone will really stop, “puh-lease, I’m a girl on the side of the road in spandex.” Two more sets of headlights are cresting the hill. We are waving vigorously at them, and they start to slow. It turns out the farmer whose property that we are stuck on is coming home from a long day of bailing hay. After a minute of conversation he agreed to give us a lift into town. He was driving the farm truck with out plates, so had to go drop the hay trailer from the other truck before he could take us anywhere. We loaded up the bikes, hopped in the truck, and were on our way. We passed the Missouri-Kansas boarder. I was a little bummed that I didn’t get a photo of it. I can always get one on the other side! Within 45 minutes of the farmer picking us up, I was settled in my hotel room and passed out immediately after the shower.

Woo! I get tired writing about it!

Also, an update on beer funds! So far $176 has been donated! Keep up the good work! This actually turns out to be $164.56 after WePay takes their cut.

Anyway, I guess that’s all that I have to write about for now.

One thought on “Long days”

This site uses Akismet to reduce spam. Learn how your comment data is processed.